Domaine des Grandes Perrières is located 5 km north of Sancerre in the municipality of Sury-en-Vaux. This operation was created in 1993 and covers four communes: Sury-en-Vaux, Chavignol, Sainte Gemme in Sancerre and Menetou-Ratel.

This operation created in 1993 started with 1.25 ha of vines. In 1996, Jerome GUENEAU built his winery. In 1997 he took over a farm of 3 hectares. In 2001, he expanded the basement and built a storage and conditioning. Year after year, the surface of vines gradually increases to propose flint old vines or traditional method wines. In 2007, the vineyard covers 4 towns and reached 14 ha. In 2008, it is the acquisition of 3ha of land in Coteaux du Giennois.

The farm now has 17ha of vines. The production is marketed at 70% for export. The remaining 30% is shared between restaurants, wine merchants and individuals. 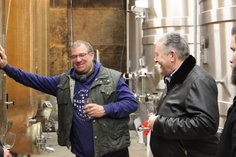