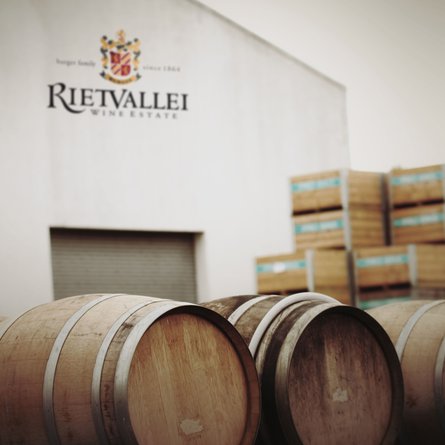 Rietvallei Wine Estate counts among South Africa’s oldest family-owned wine estates and was one of the first wine farms established in the picturesque Robertson Wine Valley some 160km north east of Cape Town. Rietvallei lies in the Klaas Voogds ward, a region with unique soil structures and climatic influences ideal for wine grape cultivation, situated some eight kilometers east of Robertson town on the way to the Little Karoo.

In 2014 Rietvallei reached a major milestone by becoming one of only a handful of South African wine estates to celebrate 150 years of ownership under one family. This heritage of a pioneering Robertson-based wine culture under the guidance of six generations of the Burger family has contributed to Rietvallei’s reputation of excellence in viticulture and winemaking. Intimate knowledge of the soils and an understanding of the interaction between nature and vine, along with visionary winemaking practices, lie at the heart of Rietvallei’s status for premier winemaking over generations.

The farm was bought in 1864 by Alewyn Burger for his son Jacobus Francois. Koos Burger, pioneering wine farmer in many ways, farmed the estate and was 70 years old when he planted a Muscadel vineyard on the farm in 1908, today the oldest of its kind in South Africa.